Created in 2014 as part of a commemoration of the hundredth anniversary of women’s suffrage in Montana, Women’s History Matters is designed to help the Montana Historical Society promote an increased appreciation and understanding of the role of women in the Treasure State’s past. The site is no longer being updated, but there is still a wealth of information here for people interested in learning more about Montana, women’s history, and the intersection of the two. 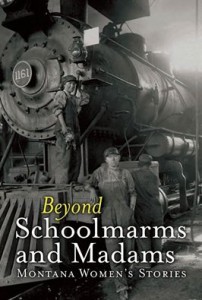 In the 1970s, women activists across the nation experienced growing dissatisfaction. As participants in the civil rights and antiwar movements, they had learned to question the status quo. Nevertheless, many of these women felt as if their own concerns—from unequal pay to sexual harassment to the lack of recognition for women’s contributions to social movements—went unnoticed. Eager to challenge gender discrimination, these women formed groups that would become the bedrock of Second Wave Feminism. In Missoula, Montana, one such group blended activism and scholarship to create the University of Montana’s Women’s Studies Program.

It began after a 1974 symposium on women, featuring speakers from various university departments, when English professor Carolyn Wheeler circulated a handwritten memo to other women faculty members, asking if they would teach a class focused on women. History professor Maxine Van de Wetering initially resisted the idea, saying she “couldn’t even imagine what that would be.” However, according to Wheeler, Van de Wetering quickly changed her mind when “she just started thinking what it could mean to . . . history.”

The response from other faculty members was electric. Joan Watson, a liberal studies professor and later director of the Women’s Studies Program, observed: “The contributions of women have been hidden from history . . . women, like people of color, have been largely absent from the texts we study.” For many students, correcting that omission seemed to be both a revelation and a revolution. END_OF_DOCUMENT_TOKEN_TO_BE_REPLACED

Terminating a pregnancy was illegal in Montana until 1973, when the U.S. Supreme Court ruled in the case of Roe v. Wade that abortion was a constitutionally protected right. Nevertheless, the practice of abortion was still commonplace. The stories of Montana women who obtained illegal abortions reveal the uncertainty, fear, shame, and danger they experienced.

Abortion before “quickening” (fetal movement) was legal in the United States prior to the 1860s, but around 1860 politicians and members of the American Medical Association campaigned to outlaw the practice. During Montana’s territorial period, it was illegal to induce abortions with either medicine or instruments, except in cases where the life of the mother was at risk. By 1895, the woman receiving the abortion as well as the person performing it were subject to prosecution.

The criminalization of abortion did not mean the end of the practice, and Montana women continued to seek professional help, or in some cases, to help each other, when they wanted to terminate a pregnancy. The practice decreased as women had greater access to contraceptives in the twentieth century, but a variety of factors—ranging from fear of complications during pregnancy to the shame of childbirth out of wedlock—meant that there was continued demand for underground abortions. END_OF_DOCUMENT_TOKEN_TO_BE_REPLACED