A new mural has been installed in the Montana State Capitol Building–the first in over 80 years. Initiated by the 2011 Montana Legislature with Senate Bill 59 and supported by private donations, the mural honors the history of Montana women as community builders. It was unveiled on January 7, 2015.

Funding for Women Build Montana was made possible entirely by the generosity of private donors. 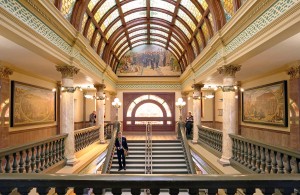 ns a central scene, surrounding by four corner vignettes.  The panels, located on the east and west walls of the grand stairway on the third floor of the Capitol beneath the barrel vault, continue the overall theme of art in the statehouse, which tells a narrative of Montana history.

Set in the late nineteenth century, in a western Montana landscape during the spring, the central scene of the first panel—which is titled Women Build Montana: Culture—depicts Native women having come to a homestead to trade for goods.  In keeping with the theme of Montana women as community builders, the scene portrays a meeting ground in which women acted as traders and cultural brokers. Montana women, Natives and newcomers, often lived quite near each other, trading knowledge and offering support as well as goods.

The central scene of the second panel—which is titled Women Build Montana: Community—is set in the fall of 1924, in an eastern Montana town.  While women won the right to vote in Montana in 1914, that right was not extended to Native women until 1924 with the passage of the Indian Citizenship Act.  The scene marks the tenth anniversary of Montana women’s suffrage and acknowledges the year in which Native women gained citizenship and the right to participate in formal state politics. 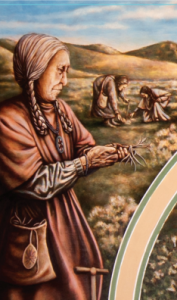 The eight vignettes surrounding the two central panels are designed to show Montana women’s cultural, social, and economic contributions to their communities and at the same time bridge the nineteenth-twentieth century divide. They depict women and children engaged in the paid and unpaid labor that helped build Montana.  On the Culture panel, women are digging bitterroot, an important food source for Native peoples and the plant that would become the Montana state flower. The two Euro-American women stitching a Montana flag, inspired by a historic account, represent the mixing of domestic arts and formal politics. Children harvesting sugar beets represent the Mexican-American families who contributed to the economy and community of eastern Montana. The Native mother and daughter beading and preparing a hide illustrate the teaching and learning of traditional arts across generations. 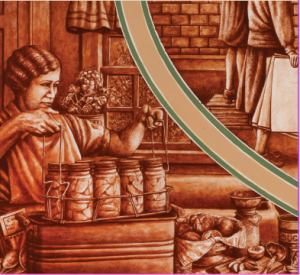 In the Community panel the vignette of a woman canning fruits references not only the work of homemakers, but the important role of home extension agents.  The telephone operators personify Montana cities’ and towns’ clerical workers and women as labor union members: the first union of telephone workers in America was organized in Montana. Thousands of Montana women joined voluntary associations that supported women’s education, here represented by members of the Montana Federation of Colored Women’s Clubs giving out a college scholarship. Education is also depicted in the vignette of a Native woman teaching botany. Botany was one of the few sciences that welcomed women, and Native women’s knowledge of the medicinal and nutritional uses of Montana plants was, and continues to be, important to both Native and newcomer communities.

MURAL LOCATION.   The Montana Women’s Mural is located on the third floor of the Montana State Capitol in Helena, Montana, under the barrel vault on the east and west wall.

The mural, painted on a removable surface, is a long-term addition to the Montana Capitol’s art collection, placed for 50 years and subject to renewal by the Legislature. 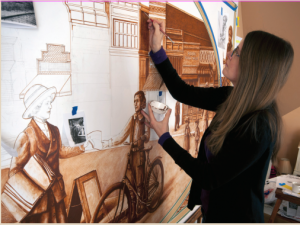 MURAL ARTIST: HADLEY FERGUSON. Hadley Ferguson, of Missoula, Montana, has been working on public and private art commissions since graduating from The University of Montana with a Bachelor of Fine Arts Degree in 1999.

“The generations of women in my family have set examples and carved paths for my mom, my daughter, and me to have the life and experiences we live today. That is what this project is about. This piece is about the generations of women in Montana who built families and contributed to their communities, to the economy, and to politics by working together to build strong communities for generations to come. It is not about one single important woman, but about all women. It is a broader picture of women. Hopefully, any woman can look at these images and see a piece of herself in them.”

Ferguson’s previous commissions include “Heart of Missoula Murals,” a historical reflection of the city of Missoula; murals at the Historical Museum at Fort Missoula; and “Missoula Catholic School Heritage Project” about the history of Missoula Catholic Schools. For each commission Ferguson worked with community groups such as the Missoula Public Art Commission and the Missoula Redevelopment Agency, as well as with historians and design review committees.

The preamble to the bill eloquently describes the many contributions women have made to the history of Montana: